Sydney, 10 November 2021 –Telcos have reported a 4th consecutive decrease in the ratio of complaints made to the Telecommunications Industry Ombudsman (TIO) according to Communications Alliance’s Complaints in Context report, released today.

The quarterly report details the complaints received by the Ombudsman per 10,000 Services in Operation (SIO) for participating service providers for each quarter.

The industry-driven report, published today for the July – September 2021 quarter, states that across all participating service providers there were 4.8 complaints per 10,000 SIOs, a decrease from the 5.3 ratio for the prior quarter and a significant drop from the 7.0 ratio of the October – December 2020 quarter. The latest results show that fewer than one in every 2,000 services in operation during the period experienced an issue that generated a complaint to the TIO.

Communications Alliance CEO John Stanton said, “This positive trend aligns with the recent complaint reports from the Ombudsman and the ACMA. However, the Complaints in Context report uniquely allows consumers to compare the customer service and complaint handling performance of telcos across sizes. It also shows the true performance of a telco over time, regardless of changes in the number of services they provide.” 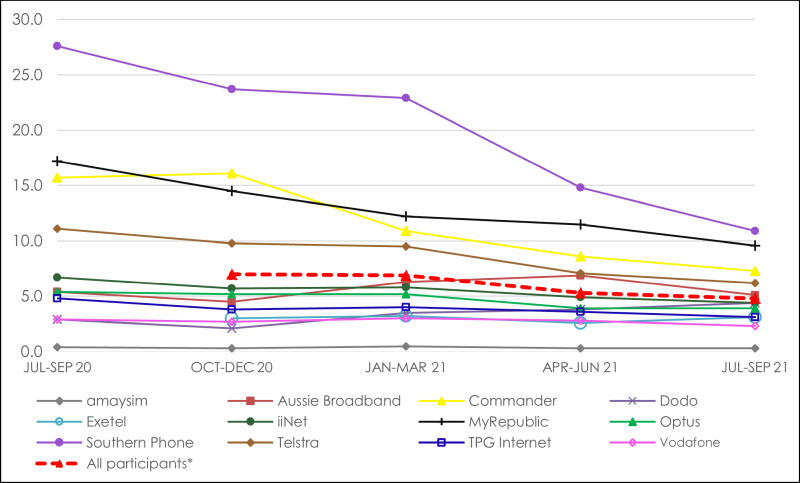 Stanton further explained, “Not only are we seeing a continued downward trend in complaints, but many participants have recorded their lowest complaint ratio since the report began in this format in 2019.”

Participants are updated annually for the October – December report (published in February), and thus the ‘All Participants’ ratio is not comparable to prior years. However, ratios for individual providers can be compared back to the July – September 2019 quarter, when the methodology of the report was updated per the revised TCP Code.

The most influential association in Australian communications, co-operatively initiating programs that promote sustainable industry development, innovation and growth, while generating positive outcomes for customers and society.  To create a co-operative stakeholder environment that allows the industry to take the lead on initiatives which grow the Australian communications industry, enhance the connectivity of all Australians and foster the highest standards of business behaviour.  For more details about Communications Alliance, see www.commsalliance.com.au.